One day my husband and I decided to travel, this was not new to us because we both love to do so and I do it quite often.

As you can imagine in every trip there is a little of everything: adventure, humor and sometimes even life threatening emergencies, well this would be my case.

As you might not know thanks to a series of misfortunate events that happened to this humble servant of karma and her beloved better half, but lucky me I’m here to tell the tale.

It was a sunny day of July, in Northern India, specifically the part known by locals as “Little Tibet”, just imagine the wide open spaces, beautiful landscapes, really getting to know the Buddhist philosophy and way of life from whom else that the monks themselves, we had arrived to the birthplace of peace!

Little did we know what was awaiting for us, my husband, our trusted guide and I started our journey. Our guides name was Tzewang, a very patient man, with a kind heart and a  great interpreter. While driving up a steep snake road for nearly 2 hrs. in order to reach Kardung-la (the highest path in the world at 5,600 meters).

Before our departure from the plane lands (a town called Leh, the capital of Ladakh) we were warned that the high altitude could cause health issues, especially if you are not a local. So we were told to stay in Leh for more than a week for our bodies to get used to the altitude shift and stay safe and so we did.

As you all know very well even when you follow instructions things don’t turn out as planned.

At about 5000 meters I started not to feel my self! I was dizzy and had trouble breathing… this is where everything took a turn for the worst. I fainted many times, my husband not knowing what was wrong with me or what to do, did the best he could, he slapped me across the face repeatedly so I could come back to my senses. Not being able to breath and every breath I tried to take was like having hot coals inside my lungs.

To add insult to injury there was a very long line of military vehicles that were not able to move back or forward to let us pass, because the path of the mountain was very narrow (in all honesty, this was not their fault it was a tough choice to either fall in to the burrow of stay on the path without moving, I think they made the right choice in the end).

All of a sudden my husband sprinted out of the car in short sleeves (it was July but we were at 5000 meters so imagine how could the outside temperature was), took out a green towel from the bag I was carrying (looking back that towel is the ugliest thing I had ever seen in my life, something I am ashamed of showing in public, but of course my dear husband couldn’t care less!).

He waved that towel like a mad man, trying desperately to call the attention of the soldiers of the convoy, I’m sure that at one point they thought  “what is this crazy man trying to do?”, I would of laughed but I wasn’t able to breath at that moment.

In that instant my vision began to blur and then everything went dark!

I woke up under a tent, surrounded by handsome soldiers, and while I was looking at them, there he was, my knight in shiny armor, my beloved, holding that ugly towel! I was able to breathe a little better thanks to the oxygen mask I had on and the sleeping bag kept me warm.

In that moment I knew I had Hypoxia, the tests confirmed my suspicion, 40% oxygen count, I was sleepy, drowsy and not able to think straight, I was trying to have a conversation with the handsome soldiers in the base and stay awake.

A few hrs. went by, I had regained my strength, so we decided to resume our trip, from here on the road went down hill, reaching Nubra Valley at 3000 meters.

Finally!!! A warm shower was waiting for us at the guest house we stayed in, it was surrounded by a beautiful garden I felt in a fairy tale!

Just so you know Nubra Valley is called by its ancient name “Ldumbra” this means LAND OF FLOWERS, it’s a magical oasis blossoming the middle of the cold desert at high altitudes. Many travelers including us are surprises at the sight of such a variety of flowers and plants. Farmers are able to grow wheat, peas, barley, almost every kind of apricots and almonds in these fertile villages, a true paradise, perfect to get me back on my feet.

After feeling a little better, I noticed that my breathing wasn’t regular, I wasn’t sleeping and my heart was always racing. From this point on the was no turning back, I had a choice to make, get on high ground and this was very risky in my current condition or stay where I was and hope for the best.

We needed help that was for sure, we had to get in touch with our insurance agency in Italy, this was a bit complicated because this area is under military command by the Indian army as this land confines with Pakistan, we all know how that will end right? Cellphone reception is none existing and contact with other parts is very limited. Then my husband did what any experienced traveler would do, he asked our driver for his phone, added some credit and finally… No signal!

For many days we tried calling and the signal was very scarce, at last on the 3rd day we succeeded, we left Nubra Valley and returned to Leh.

Hold on! Now is where the magical happened, for some lucky reason our insurance company was able to arrange a pick up/ drop off with a private helicopter, unbelievable right?

Imagine my surprise when the official documents were released and stated “evacuation procedure”.  All the near villages heard the news, it not a common outcome for travelers to fly on a helicopter, especially in a No Fly Zone, but I’m a lucky lady!

On the 4th day, in the afternoon our driver took us to the landing spot at about 45mins. Away from the guest house, everyone had gathered to see with their own eyes the lady that was about to fly over the Siaken Glacier and that my friends is how I became “Miss Helicopter”!!

What they called helicopter was very far form reality, for this was a flying orange soda can! The hairs on the back of my neck stood straight, for a second I thought: it wouldn’t be so bad if I stayed here for the rest of my days, growing spelt or anything else instead of getting on that “Thing”! It was small, orange and it looked like the “dream helicopter” you know! From that famous doll we all know! So small in fact that our bags had to stay behind, we made a choice, the bags or us!

But wait…our “pilots” with 5° outside were wearing t-shirts and shorts!Yes! I know, super safe! At least they had and oxygen tank… on a plastic helicopter, with no room to move and pilots with no gear! Maybe I should of stayed home.

Once on board, scared to move a finger in case the plastic would break, I saw all the people below waving back with their hands and hats, the Icy Giants were getting bigger while the people got smaller…

The landscape was without a doubt the most beautiful thing I had seen in my life… flying over the Kardung-La, I was scared for a moment, I remember thinking “Maybe I did die from a heart attack getting in the plastic can!”

However… the valley went beyond the mountain tops, the bright green and amber broke the monotonous colors of the stone desert. A fantastic vision!

After landing, I took a deep breath and felt like a hero! Many people were waiting for us, our faithful companion had taken his kids to see this amazing, once in a lifetime event “the landing of the female hero in the plastic can”. I was at land, finally… after all that had happened one thing was on my mind…FOOD! So we stopped in the best restaurant in town, to celebrate out adventure, eating fish dumplings and a bottle of beer stashed under the table, after all the main religion is Buddhism, but some exceptions are allowed!

While at the table Tzewang gave us some helpful information about their belief. “Maybe the mountain didn’t let me through the path due to my karma” but I still have to understand what this means, maybe the green towel? The plastic helicopter? Or maybe because we left the crop growers without help for the season? One day I’ll come back and find out! Anyway I’m glad to be back!

next time instead of nearly killing me, please send me a post card or E-mail letting me know don’t want me to visit (I know it was because of the towel, it won’t happen again, I promise). 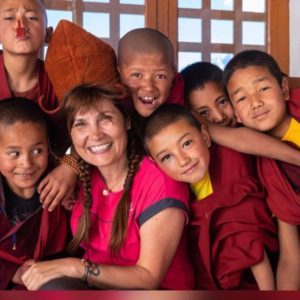